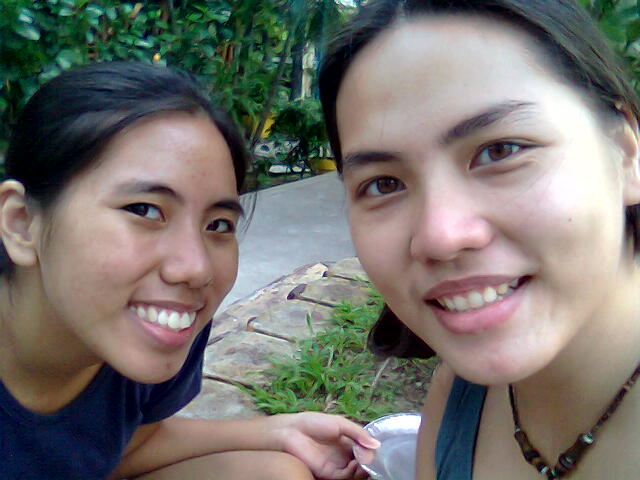 I can’t remember when this was taken, but it was when my sister still lived in the Philippines, so around 4 years ago. Miss her everyday still. 😥

Happy Happy Birthday to the Best Sister in the World!!!

And since it’s my sister’s birthday today (Yep, you guessed it, she’s my only sister. Hehehe!), the quote of the day is one my most favorite quotes of all time. 🙂 I hope you like it.

My favorite color is red. I know I usually say that it’s blue or gray, and I really do love those colors, but there is something about the color red that excites me, which I guess is typical because everyone knows that that’s what that color does to people. It’s the main reason why red is the color of the fabric they use in bullfights (because you know, bulls are colorblind). But anyway, I’m getting off-topic. The point is that I love the color red, and that’s directly related to this next statement — I love February. February is my favorite month of the year. 😀

I know, I know, I was born in September, and I’m supposed to like that month better. Or maybe December because that’s when Christmas is, but truth be told, I’m not very fond of the Christmas season. I actually like New Year’s Day better than Christmas, and here’s another fact: I love Valentine’s Day best, out of all the capitalist holidays that we have. Maybe it’s just because I love the color red, and February, or you know, it’s all interconnected. The reasons why I like February is because Valentine’s Day is in it, so a lot of decorations are red, and it’s the only month that changes in number of days — 28 most of the time, 29 during leap years! Cool, right? 😉 Or… maybe it’s not cool, and I’m just abnormal, but whatever. I love this month anyway.

So it’s February now. The second month of the year and there’s no going back (well, there never is anyway). Why is 2009 moving so fast? I haven’t even said “Happy New Year” to everyone I wanted to say Happy New Year to. 😐 Oh well, I guess there’s always next year? Hehe. I’ll start this month by telling you a story about mean people.

“Some men just want to watch the world burn.”

(If you don’t know where that line is from, I feel sorry for you. Hehehe. If you must know, ask your friends. One of them is bound to know.) Do you believe that line? I do. It seems a bit too deep for my story, because this is a blah story, but I’m telling it anyway.

Earlier today I was on my way to a pre-baptism seminar (I’m godmother to my former teacher’s new baby — I’m taking “teacher’s pet” to a whole new level! Hehe) and I had to cross the street. I was already halfway to the other side, but couldn’t continue because there were just too many cars on the oncoming traffic. So, I was standing in the middle of the street, waiting for my chance to finish crossing when suddenly the driver of a car passing behind me shouted “BOO!!” really loudly! It was obviously to startle and disorient me because I even heard his friends laughing in the passenger seat.

Luckily, at that exact moment, there weren’t any cars in front of me, but had there been one going really really fast, I have no doubt that I would’ve been hit.

So… WTF?!?!?! 😡 I can’t believe how mean people can be! Seriously, they had absolutely nothing to gain from the stupid activity of surprising me, while I had everything to lose. I could’ve been killed! Just how narrow minded are they?!?!? 😡 I actually even thought that it would’ve been cool if I did get hit so they would suddenly find themselves in deep trouble and they would go straight to hell. Well, if I’m not the only person they ever did that to, they’re going to hell anyway, but I really hope that one day something bad really happens to them as a result of their stupid actions. I know it’s bad to wish ill of other people, but gah… Some people are really good for nothing but ruining everyone’s day.

Now, after that irritating story, which I’m sure will make me mad every time I tell it, let’s move on to a happier topic. 🙂

I just found out that two of my friends quit smoking. 😀 Yay!!!!

I love people who quit smoking. 🙂 And may they never go back to bad habits that destroy the Earth. 😀

And an even happier topic

Happy Birthday
to my sister who turns 20-something 😉 tomorrow! Yehey!!

My parents and I ate dinner at Churrito Cafe to celebrate her birthday (even if she’s in New Zealand. Haha!). And it was fuuun!! Food is great. 🙂 I love churros, and chocolate, and cafes, and I love that it’s in Parañaque. So prissy North people can’t get to it easily. Haha! (OK, just to make things clear, I don’t hate everyone from the North. Just the ones who don’t like us pseudo-Southerners (because the real Southerners are people in Mindanao).) I’m actually just agitated because the reviewer from clickthecity said “I was floored to see a charming little cafe that could’ve easily been found in Makati or Ortigas.”

Excuse me?!?! She was floored to see a charming little cafe that could’ve easily been found in Makati or Ortigas??!? If it’s so easy to find in those areas then she should just stay there. We don’t need her kind here. 😈 Hehehe. OK, I’m being mean again. 😦 Maybe I deserved having been almost hit by a car earlier. Fine. I’ll be nice from now on.

I’m going to wish everyone a great February!! 😀 Valentine or no. There’s plenty of other reasons to be happy this month. Yay!! 😀

P.S. I also temporarily changed my layout because this is more Valentine-y. Hooray for flowers!! XD

You know how sometimes, things don’t seem to start unless something big changes? Well, today sort of feels like that.

My sister just left to go back to New Zealand. I know she’s been living there for the past 2 years, but it still feel strange whenever we bring her to the airport, knowing that we won’t see her again for at least another year. So we keep in touch through e-mail and all that, but it’s still not the same as actually having her around, making jokes, meeting with friends, watching movies (although we didn’t actually get to see movies this time), eating dinner at the same time, at the same table…

Anyway, because she was here for the past couple of weeks, I took some time off work so we could hang out. But now that she’s back in New Zealand, well, I’m back to work and the usual routine as well. So yesterday was the last day of my vacation, and today is the real first day of my 2009.

So there. That’s what I’ve got so far. I’m very doubtful that I’ll get to do all of it (especially the last one, because that’s been my new year’s resolution since, forever). But, you never know.