It might’ve not been the best idea to go to the Open House at my school (where I study Japanese) after a month of not reading/studying anything remotely related to anything Japanese. Seriously, I have not been watching any J-dramas, anime or even reviewing my lessons (Yes, I’m a bad student. Don’t act surprised.) since the week before I left for New Zealand, which is about a month ago. I guess it was really stupid of me to try the Trivia Booth to win a prize then, huh? It’s just that… it looked fun! Besides, I didn’t do that badly. I think.

Anyway, I totally messed up the first question I got, though they didn’t blame me because it was about Japanese Classic Literature, and nobody knows much about that. (Although I should, since I studied it in college. 😐 But the people in charge of the booth didn’t know that, so…) Still, I was frustrated I wasn’t able to answer the first question they asked, so I gave them another 3 pesos and hoped that the next question they’d ask would be easier. I even chose it from the same category: Japan.

And sure enough, the next one I got was a lot lot easier: What prefecture is Tokyo Disneyland located in? (The answer is Chiba, for those of you who didn’t know, and are curious.) And the next one was somewhat easy, too. In the category of Anime/Music, I was lucky to get one from an old anime, one that I watched at the time that I was still really really into anime: Rorouni Kenshin. It was a bit tricky though and I almost didn’t get it: What era was the RK OAV Trust & Betrayal set in?

So at first I answered “Meiji Era” since that’s the setting of Rorouni Kenshin, but at the last minute I remembered that Trust & Betrayal was a flashback of Kenshin’s old life, so I changed my answer to “Tokugawa Era”. Yeah, that’s probably nothing to you anime addicts out there, but for someone who hasn’t been into anime for a long time like me, I’m quite proud of myself for remembering that detail. 🙂 And I got to the third category for it.

Unfortunately, by that time, my luck had run out, and I got a question I wasn’t able to answer correctly. And it was embarrassing too because it was something I was really supposed to know. The last category was Nihongo, and I was supposed to translate this statement: I will be in Japan from April 6 to October 31 next year.

It’s technically Elementary 1 stuff, and because I’m already in Elementary 3 I’m not supposed to struggle with it. But… but… it was just too long a sentence! 😥 And it’s got dates and the “be” verb, which is just really really difficult. I think it was the particles that got me. It’s always the particles that make me fail anyway. 😦 So, yeah, the sentence I said was wrong, and I didn’t get the prize I was supposed to get. The people at the booth were really nice though and gave me a prize anyway. For the effort, I guess. But instead of the CD (or maybe it was a DVD or something else I don’t know, it was gift-wrapped), I got a keychain instead. It’s a cute keychain though, it’s got a monkey on it. Hehe.

So I don’t think I wasted any time going to the school’s Open House since I got to see my friend and we got to do fun Japanese stuff, i.e. tea ceremony, wear a kimono, watch a sumo-wrestling match, and eat onigiri :). But it did remind me of something that makes me a bit sad, or if not sad, scared: I am totally unprepared for my midterm exam this Saturday. 😯

First of all, credit where credit is due: Photo manipulation was done by my friend Dyeane. 😀 Thanks so much!

[She’s a great artist! Check out her gallery! She didn’t have a lot of time to do this though so it’s not that polished. I think she did this in about 10 minutes 😛 and mostly because she probably felt sorry for how bad it was when I tried to do it. Hehe.]

So anyway, let me tell you what brought about all these.

I was reading a review for the J-Drama Last Friends, and it described Nishikido Ryo‘s character as someone who makes a 180-degree turn all in one episode (and it was the first, too) –he starts out as a patient, loyal boyfriend, and then turns into a rather abusive one.

The site had screen caps of it, and one in particular showed Nishikido-san in a light I’ve never seen him in before. Of course, I’ve had very limited exposure to him (I mostly just see him because he’s in a lot of the videos that Yamapi is in, and well, of course, my attention then would be on Yamapi 😉 ) so far, but anyway, he looked really different from the somewhat cheery, goofy character that he is when he’s with NewS. 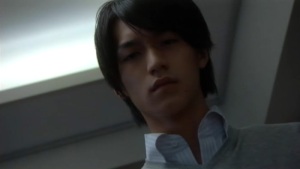 He kind of has a dark aura surrounding him, doesn’t he?

Okay, so the hair color is different, but there is definitely a similarity in expression and like I said, in their aura. So then I wondered, what if they got Nishikido Ryo as the actor to play Yagami Light in the Death Note movie?

Don’t get me wrong, I love love love Tatsuya Fujiwara. I think he’s a great actor, and he’s cute to boot. But it never hurts to think of them “What If” questions, and this is also for those people (because I’ve seen a lot on the net) who think that Tatsuya Fujiwara looks too girly (or not handsome enough) for the role of Light (Note: I don’t agree with them). 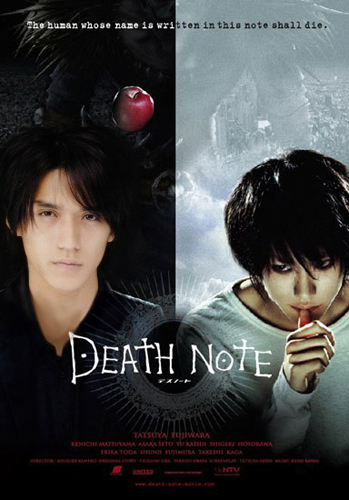 So, yeah… I’m just wondering is all. 😛 I haven’t really seen Nishikido Ryo acting, so I can’t tell if he’d make a good Light Yagami, although he certainly seems handsome enough (at least, in my opinion 😉 ). What do you think?